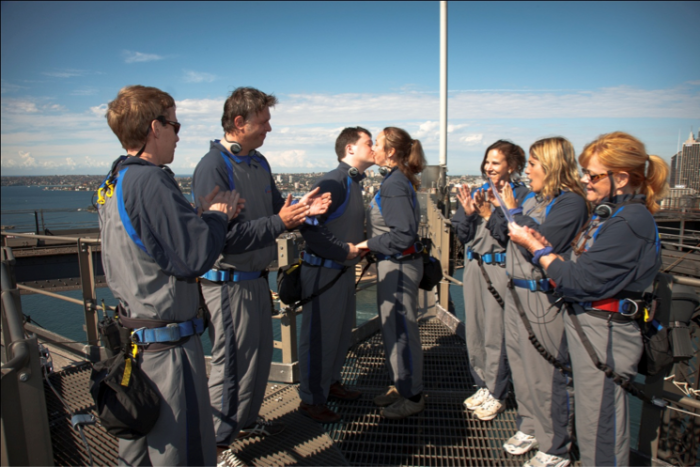 After eight years of living in Australia, this happy couple decided to make their vows in a memorable way before heading back to England, and what a high point it was, as the venue they chose was none other than the Summit of the Sydney Harbour Bridge.

Our British couple were certainly the envy of their friends, as elated and excited and looking down over our magnificent harbour and Opera House, they were married by their specially chosen, local Northern Beaches Marriage Celebrant, Dianne Morpurgo.

The whole of the wedding party were harnessed to the bridge and dressed in boiler suits to ensure their safety as they climbed to the top of the bridge under the supervision of guides.

The ceremony was then performed by Dianne at the “Apex” of the bridge under the Australian Flags, in view of all, including the passengers of a plane flying overhead.

The handling of documents and the exchanging of rings was awesome, with the photographer, Grant Schwarz, getting some amazing shots of the bridge, the climb, the couple being married and the breathtakingly beautiful panorama.

After the completion of the ceremony the wedding party descended to a room that had been closed off to the public….so with the boiler suits and harnesses removed and with more traditional wedding attire “donned” their celebrant, Dianne Morpurgo, conducted a Hand Fasting Ceremony and then the signing of the Marriage Register, allowing more orthodox wedding photos to be taken.

Sydney’s weather behaved beautiful and provided memories one English Couple will treasure forever, as will their bridal party, their photographer AND their celebrant.

Tell us what you think – do you agree, or do you have another favourite song that should be on this list??

You were born together, and together you shall be forevermore.  You shall be together when the white wings of death scatter your days.

Ay, you shall be together even in the silent memory of God.   But let there be spaces in your togetherness, And let the winds of heavens dance between you.

Love one another, but make not a bond of love: Let it rather be a moving sea between the shores of your souls. Fill each other’s cup but drink not from one cup.

Give one another of your bread but eat not from the same loaf.   Sing and dance together and be joyous, but let each one of you be alone, Even as the strings of a lute are alone though they quiver with the same music.

Give your hearts, but not into each other’s keeping.   For only the hand of Life can contain your hearts. And stand together yet not too near together:;  For the pillars of the temple stand apart, and the oak tree and the cypress grow not in each other’s shadow.